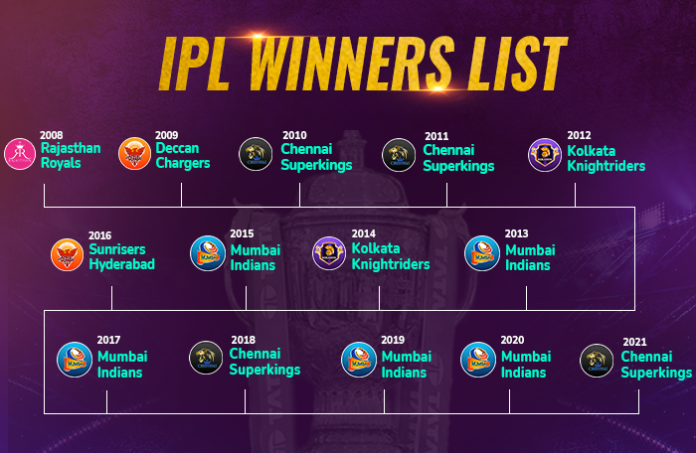 The Indian Premier League, popularly known as IPL is among the biggest cricket events organized annually in India. Its inception dates back to the year 2007 when the BCCI committee announced this mega championship of cricket under the chairmanship of Lalit Modi. Since then, IPL has been ruling the heart of cricket fans and the present season, that is Tata IPL 2022 commenced on March 26 and is celebrating its 15th successful ceremony with millions of fans staying connected through stadiums, televisions, internet screening, radio, and more! Continue reading to know the IPL winner list along with the runner-up teams and get details about the captains and men of the matches who got unbeatable victories in this outstanding championship over the years.

Gujarat Titans and Lucknow Super Giants were the two sides that were added to the league in 2022. Both sides were impressive in their debut seasons and Gujarat Titans had an inspired season as they went all the way to win the IPL title.

In the last season of the IPL, debutants Gujarat Titans led by Hardik Pandya beat Rajasthan Royals by 7 wickets to win the title. Batting first Rajasthan 130 for 9 in their 20 overs. In response, Gujarat chased down the total with relative ease and won the match in the 19th over with 7 wickets to spare.

Uptil now, the Mumbai Indians have remained to be most successful Indian Premier League team and marked to be the champions for five times, followed by the Chennai Super Kings who have been victorious in four leagues. Here are the names of IPL teams with their respective victories:

There is always a story behind an unbeatable success. The following are the details about the IPL cup winners list across the seasons:

The finale of the first season was held between Chennai Super Kings and Rajasthan Royals at DY Patil Stadium in Mumbai. Shaun Marsh of Kings XI Punjab was the highest run-scorer, and Sohil Tanvir of RR grabbed the maximum wickets in the series. Shane Watson of the Rajasthan Royals was declared the player of the series.

The second season of IPL was conducted in South Africa with the finale being fought between Deccan Chargers and Royal Challengers Bangalore. Matthew Hayden of Chennai Super Kings was the highest run-scorer for the series, whereas RP Singh of Deccan Chargers got the maximum wickets.

The fourth season of IPL was held between 10 teams in India. The finale of this championship was held in Chennai between Chennai Super Kings and Royal Challengers Bangalore. Chris Gayle of Kolkata Knight Riders was the highest run-scorer in this tournament and Lasith Malinga of Mumbai Indians captured maximum wickets.

The sixth IPL series was organized in India and the final championship was conducted between Chennai Super Kings and Mumbai Indians. Michael Hussy of Chennai scored the highest runs and Morne Morkel of Delhi Daredevils for the highest wickets. Shane Watson was declared the man of the series during this championship.

The finale of the IPL 7 was held between Kolkata Knight Riders and Kings XI Punjab. Robin Uthappa of Kolkata Knight Riders earned the title of highest run-scorer, whereas Mohit Sharma of Gujarat Titans got the maximum wickets. Glen Maxwell was acknowledged for the overall play in this series.

The 8th championship of IPL was organized in India with the final match between Mumbai Indians and Chennai Super Kings. David Warner who was the captain of Sunrisers Hyderabad earned the title of highest run-scorer, and Dwayne Bravo of CSK was the highest wicket-taker during the tournament. Andre Russell of KKR was titled to be the player of the match.

The tenth season of the IPL was organized across India and Mumbai Indians and Pune reached the final match. David Warner of Sunrisers Hyderabad gained the highest run, whereas Bhuvaneshvar Kumar of Sunrisers Hydrabad got the title of highest wicket-taker. Ben Strok of Pune was titled to be the player of the tournament.

The final match of the 11th season of the Indian Premier League was between Mumbai Indians and Chennai Super Kings. Kane Williamson of Sunrisers Hyderabad had got the title of highest run-scorer, whereas Andrew Tye of Kings XI Punjab grabbed the maximum number of wickets.

The finale of the 12th season of IPL was between Mumbai Indians and Chennai Super Kings and this was the fourth time when both the teams were facing each other in the IPL final. David Warner of SunRisers Hyderabad and Imran Tahir of Chennai Super Kings gained the title of highest run-scorer and wicket-taker respectively.

In 2021, Chennai Super Kings defeated the Kolkata Knight Riders to win the championship. The finale was held at the Dubai International Stadium. Ruturaj Gaikwad of CSK scored maximum runs which counted a total of 635. Harshal Patel of Royal Challengers Bangalore bagged the maximum wickets in this tournament.

Among the two sides that were welcomed into the IPL fold, Gujarat Titans played their first season in 2022. Led by Hardik Pandya and with Ashish Nehra as the head coach, Titans had a superb season where almost all the key players stepped up in different matches and it all led to them winning the title in their very first season. Gujarat Titans beat Rajasthan Royals in the finale to win the IPL title.

IPL Teams Over the Years

There had been numerous ups and downs when it comes to IPL team formations as some remained unbeatable and some got dissolved over the years. This year a few new teams hit the ground and are currently ruling the hearts of cricket admirers with their flawless gaming manoeuvres. Here are the current IPL teams and their respective owners and captains:

A) The Mumbai Indians have until now won the maximum titles of IPL championships. They have won 5 tournaments.

A) The Chennai Super Kings won the championship of IPL 2021 by defeating the Kolkata Knight Riders.

Q) Who is the maximum rum gainer in IPL?

A) Virat Kohli of the Royal Challengers Bangalore has earned the maximum run score in the IPL. Till now, he has scored 5878 runs.

Q) Who has taken the maximum wickets in IPL?

A) Lasith Malinga of Mumbai Indians grabbed the maximum number of wickets in IPL and has taken 170 wickets.

A) Gujarat Titans won the IPL 2022 by Defeating Rajasthan Royals