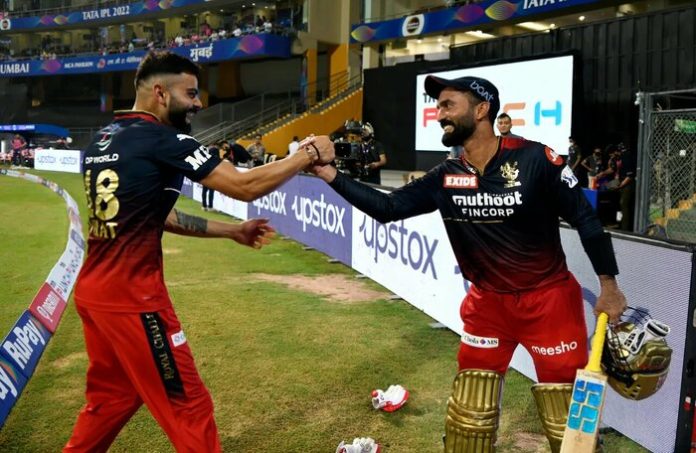 This will be the season’s most anticipated matchup between two teams that have performed admirably thus far. The Royal Challengers Bangalore and the Lucknow Supergiants have each won four games and lost two. Both teams have had the same trend of successes and losses. RCB, like Lucknow, has four wins from six games and is now ranked third behind Lucknow. This season, Royal Challengers Bangalore has also been on a roll.

Faf du Plessis and his passionate band of youngsters came back strong in the next game to upset Delhi Capitals after losing to CSK. The Royal Challengers’ Dinesh Karthik and Josh Hazlewood did the job in their previous game, and they’ll be looking to repeat the feat against an in-form LSG. Dinesh Karthik has a strike rate of 209.57 this season. Despite losing early wickets, Glenn Maxwell and Dinesh Karthik led the side to a 189-run total, which was an outstanding effort. Bangalore appears to be well-equipped, and their bowling has improved since the additions of Josh Hazlewood and Harshal Patel.

Harshal Patel made his comeback against Delhi Capitals after missing the previous match. He replaced another pacer, Akash Deep. His comeback should ensure that RCB’s starting XI remains unchanged. Royal Challengers Bangalore, on the other hand, experienced a similar story this season. They dropped their first match of the event before going on to win a hat-trick of games to cement their place at the top of the table. RCB, on the other hand, lost to CSK previous week before overcoming Delhi Capitals by 16 runs.

Wanindu Hasaranga has 11 wickets in six IPL 2022 games, with an average of 18 and at least one wicket scalped in each match. Apart from Dinesh Karthik, who has lit up the stage and aspires to represent India again at the T20I World Cup in 2022, he will be the player to watch.

The DY Patil ground features a pitch that gives bowlers good bounce, although it often stays true. As a rule, we may expect matches to produce scores in the range of 160-170. In general, it is a surface that can assist both departments.

RCB will play first match against LSG in IPL

Royal Challengers Bangalore is expected to win tonight’s match with their current from and team combination.