How To Place & Shoot The Striker in Carrom 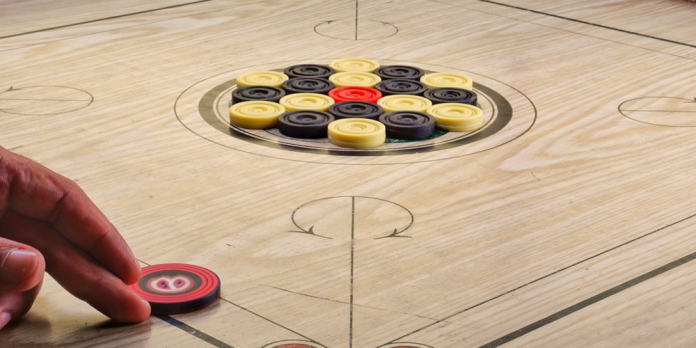 Well, you want to win the Carrom Game and committing to fouls loosens the chance! So, here are some of the tips on how to place and shoot the striker in Carrom to prevent these fouls.

Did the gritty of losing the game catch you? Yep, we understand that sometimes you gotta win and the small techniques (that you are missing out on) get in the way. Placing and shooting the striker in Carrom can be a little tricky. The formal professional Laws of Carrom by the International Carrom Federation and the number of fouls that you are likely to commit when you do not know about these simple rules.

So, let’s talk about them in detail to make you win the next game you play with zero fouls and awesome shooting techniques:

How To Shoot The Striker in Carrom

In a game, there are a number of shooting styles that makes pocketing any game piece easy. Your angle of strike sure does matter a lot but so does your style of flicking makes the striker slide in the desired direction at a calculated speed to make the game piece slide according to your desire.

Let us take a look at these striking styles so that you can nail the game next time your play:

If you are a right handed player, your striker will move slightly in the right direction from the intended direction. Whenever your finger is bent and then straightened, it moves in an arc so be a little cautious of your direction and the intended destination.

It is just another version of the long finger striking style but the main difference is that you hold the middle finger back with the help of your thumb rather than index finger.

In this particular striking style, you have your middle finger perpendicular to the board and the edge of your palm doesn’t rest on the board. This striking style comes in handy when you have a lot of game pieces around your baseline and you are targeting more than one game piece at once.

PRO TIP: Use this style when there is no space around your baseline.

There are some exceptions where backshots are allowed. Now, a thumb shot striking style is used when you have to pocket your game piece behind the baseline or near the baseline.

How To Place the Striker in Carrom

If you do not want to commit fouls and lose the game, you need to know the correct method of placing the striker.

Frequently Asked Questions about Shoot The Striker in Carrom

Q) How do you hit a striker?

A) Hitting or striking means the same. The aforementioned methods of striking will surely help you hit your striker in the correct way. Just remember that you need to strike your striker and not push it. Otherwise, you will have to incur the penalty as a foul.

Q) What is the motion of the striker in carrom?

A) Well, if we have to talk about the motion then it is rectilinear motion. If somehow, when you strike the striker and it starts rotating then the motion would be rectilinear but also rotational.

Q) What happens when I pocket the striker?

A) If you happen to pocket a striker, it is a foul and you are penalized. Generally, you have to give one of your pocketed game pieces to the opponent. Now, the opponent uses this as his advantage.

We understand that placing and shooting a striker can be a little tricky and it takes time to fully get well-versed with it. But, practice makes a man perfect and when you start shooting solely without any game pieces on the board, you will gradually learn the trick.

You can always pick a few of the striking styles that work best for you. Although, please take care of your nails as you might hurt them while striking.