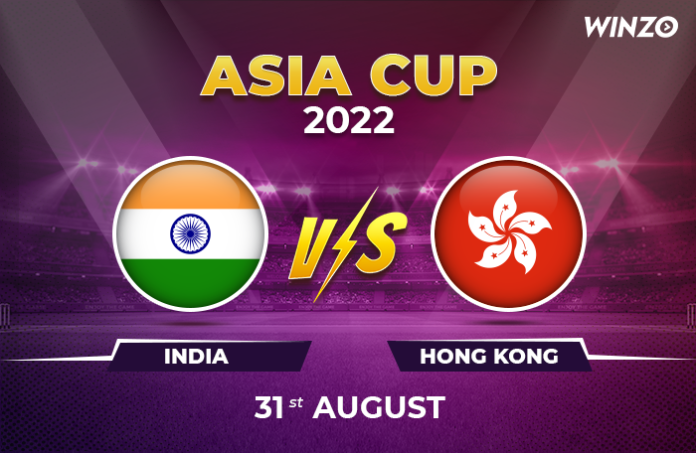 India and Hong Kong are all set to go head to head against each other in the fourth match of Asia Cup 2022 in Dubai today, on August 31. The match is scheduled at Dubai Cricket Stadium in Dubai from 7:30 PM onwards. Both the teams belong to group A along with Pakistan and this will be the first T20 match between India and Hong Kong in the series.

In the previous match, India defeated Pakistan by five wickets in their opening match. The Pakistan team scored 147 by batting first, however, India chased the target with five wickets and two balls to spare. Hardik Pandya was declared the Man of the Match for his fierce batting of 33 runs and took three wickets. The Indian team is currently led by the skipper, Rohit Sharma who is elated with the first win of the team. He appreciated the mindblowing manoeuvres by Hardik Pandya during the post-match celebrations.

The current series of Asia Cup 2022 comprises 13 matches and being the previous winner of the title in 2018, fans are quite enthusiastic to see India as the winner in the current championship too. Till now, India has aced the maximum Asia Cup titles by being victorious in seven championships, followed by Sri Lanka who has won 5 titles.

This is the first T20I match between India and Hong Kong, however, both teams have played two ODIs against each other and India has won both games. The last match between the teams was during Asia Cup 2018 when India won the challenge with 26 runs. The Hong Kong team seems to be well-prepared for the championship and has qualified for the series for the second time.

Today’s average temperature is likely to be around 35°C with 45% humidity and 16 km/hr wind speed. The weather is clear and there are no chances of precipitation during the game.

The pitch at Dubai Cricket Stadium is appropriate for a score ranging between 160-170 and is not ideal for impulsive batting. The straight boundaries are quite short, enabling batsmen to take advantage. The surface is suitable for spinners.

You can watch live streaming on Disney+ Hotstar

According to the current form of the players and previous performances, India is expected to be the winner in today’s match.