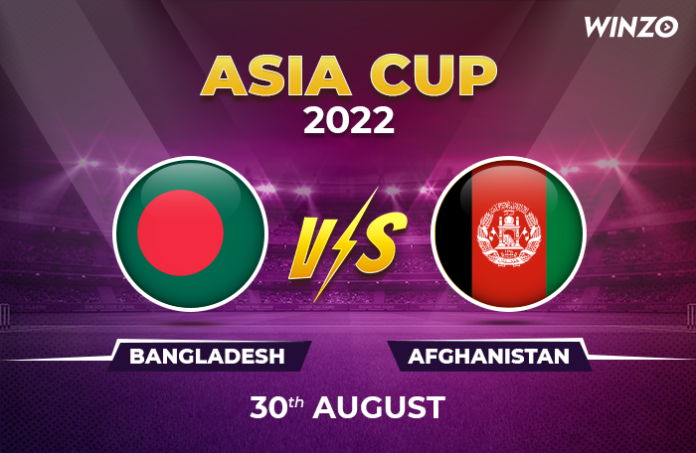 Bangladesh and Afghanistan are all set to challenge each other in the third match of Asia Cup 2022. The match is scheduled for August 30, Tuesday at Sharjah Cricket Stadium in the United Arab Emirates. The Bangladesh team is led by Shakib Al Hasan in the current championship whereas, Mohammad Nabi will be leading the Afghanistan team.

Afghanistan and Bangladesh are part of group B and this will be the opening match for Bangladesh, whereas Afghanistan played their first match of the tournament against Sri Lanka and became victorious by 8 wickets.

The fierce team of Afghanistan opted to bowl first against Sri Lanka even after winning the toss. The latter team lost two wickets in the first over with Kusal Mendis having a score of 2 and Charith Asalanka with a 0 score. However, Bhanuka Rajapaksa and Chamika Karunaratne tried to pace up the inning by scoring 38 and 31 respectively but the team got bowled out at 105.

Hazratullah Zazai and Rahmanullah Gurbaz, the opening batsmen of the Afghanistan team smashed 37 and 40 respectively and elaborated the opening stand of 83 runs. The target was comfortably chased and the team won the match with 8 wickets by maintaining the average run rate of 10.1 overs. Fazalhaq Farooqi gained the title of the man of the match for grabbing 3 wickets.

If we check the head-head records, Bangladesh has played 8 matches against Afghanistan, out of which the former has won 3 matches. The Afghanistan team has won the remaining 5 matches.

The pitch of the Sharjah Cricket Stadium is typically flat and might be a bit slow for spinners. It is quite suitable for batting, and the team that wins the toss is expected to bat first.

The average temperature is expected around 35°C with 45% humidity and 13 km/hr wind speed. There are no chances of rainfall today.

You can watch live streaming on Disney+ Hotstar

According to the current form of the players and previous performances, Afghanistan is expected to be the winner in today’s match.