WinZO
HomeGaming GuidesTop 10 Tips and Tricks That Makes You Play Carrom Like A...
Gaming GuidesTips & Tricks 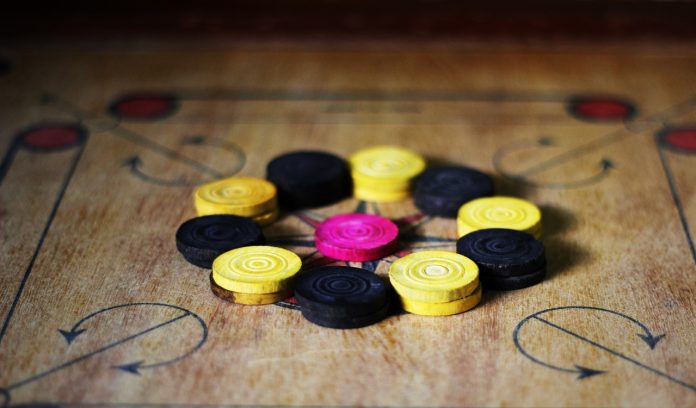 Tips and Tricks for Carrom comes in handy every time you play the game. Ace the game with these useful tips and tricks that are sure to make you win this time.

Carrom is played worldwide and is one of the best old age games that you might have played in your childhood. We know that earlier you had your friends and family around to play with. But, now, the game is available on various digital platforms where you can play with random strangers around the world from the comfort of your home.

Originated in India in the 18th century, this game requires concentration and a good sense of angle. Being this popular, various cafes and clubs hold tournaments and regular competitions around the game. Players have claimed that this game will never bore you even if you play for hours.

Read More: How To Play Carrom

So, after talking to some of the experienced players we’ve curated a list of tips and tricks that is sure to make you win every time you play the game:

Carrom is an indoor tabletop game which is purely based on your skills. The choice of angle of strike and the ability to pocket all game pieces along with the queen makes the player win the game. It is a little tricky to win the game but with simple tips and tricks, you are sure to win the game every time you play.

Side shot is one of trick shots widely used to pocket your game pieces. This simple trick helps you move away from your opponent’s game pieces. A side shot consists of hitting a striker in such a way that it pushes the game pieces in the opposite direction that was hit making it difficult for your opponent to pocket that game piece.

And, if it is feasible, you can push your game piece directly into the pocket. Generally, players use this trick to be on a safer side.

The middle shot is only played when the carrom game pieces are in the centre, i.e.; when the game begins. You have to hit 2 game pieces concurrently but flicking the striker wherever you find a space between two game pieces.

The space between these game pieces will make them slide in opposite directions, hence, you might have a chance to pocket two game pieces simultaneously in the beginning of the game.

This carrom trick comes in handy when you need to cut a carrom to a different direction and simultaneously, in this very turn, you pocket one of your game pieces.

Now, your next shot would be really easy to pocket another game piece.

We can understand, as a beginner your fingers might start hurting after a while. So, thumb hot is such a technique to flick your striker even stronger. For a thum hot, form a circle with the help of your index finger and the thumb. Now, in this case, flick your thumb towards the striker for the stronger shot.

Well, you know the excitement of the game if played in doubles. Alley Oop is one of the trick shots that you can use when you are playing in doubles. You have to slide your game pieces in such a way that your partner gets to pocket it.

There are times when you know that the game piece can move in the direction where it is easy to pocket but that game piece is not likely to be pocketed by you. Hence, this shot comes as a saviour for you where your partner can take the advantage.

When it comes to winning, you have to play a little smarter than your opponent. Sometimes, it is necessary to pocket two game pieces simultaneously. The second hit is a shot that is used when your game piece is blocking another game piece.

So, you have to hit the game piece (which is blocking) so hard that it hits the blocked game piece. Ultimately, both of them are pocketed in one single shot.

A little tricky shot meant for only advanced players who are well-versed with the game. Making the striker touch three different sides of the board in a way that the game piece is pocketed during the hits of the striker.

PRO TIP: Do not try this trick if you are a beginner, you might pocket the striker resulting in a foul

Cut shot aims at the game piece which is placed on the centre of the board. In this, you need to keep your striker in the right or left corner of the baseline but aim the striker to slide in the opposite direction.

This helps in pocketing the centre game piece right into the pocket.

A double shot can only be taken when the game piece is placed anywhere near the centre of the board or right on the centre. In the shot, you need to flick the striker in such a way that it hits the game piece on the opposite side of the board. And after it collides, it comes back to the pocket of your side.

When your game piece is located near the baseline but as per the rules, you can’t hit the striker backwards. And we can understand the urge to pocket the game piece which is so close to the pocket.

Hence, in such a situation, strike the striker so hard towards the opposite direction that it hits the board and comes back to the place where your game piece is while making it slide towards the pocket.

Some Useful Carrom Tricks That You Should Know –

Bonus Tip: How to Perfectly Flick the Striker?

Well, this is not something that you are going to master in one day. It takes a little practice on how to flick the striker in a way that it hits the game pieces while pocketing them.

But here are some useful carrom tips that you can use while flicking your striker:

Q) How do I get better at Carrom?

A) Getting better at Carrom is not a one day game. Practice makes a man perfect and yes, practising the aforementioned tips will come handy to better you in playing Carrom.

Q) What is the most powerful game piece in Carrom?

A) The most powerful game piece in Carrom is the queen, the red piece which is also the winning piece in the game. But do not ever pocket it without pocketing your other game pieces otherwise it would be considered as a foul.

Q) Can we use both hands in Carrom?

A) Well, there is no such rule as hands in the game but surely, you can’t use both hands at once while playing the game.

Carrom is a thrilling skill-based game. A perfect knowledge of angles and strike makes you win the game. But always, remember, it is just a game. And, if it is not a tournament or anything, do not get over-competitive as it might spoil the spirit of gaming altogether.

We hope that these carrom tips and tricks will surely help you get better at the game.

All the best for your next game, till then, Cheers!