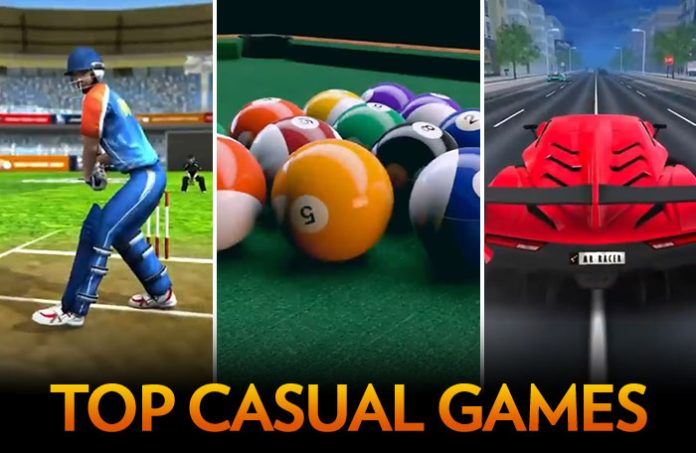 Casual Games are video games that can be played casually, which means you do not need to put an additional effort to play these games. You can take these games whenever you are available and prefer to spend some interesting gaming hours. In other words, it can be said that those games that are played spontaneously without being regular or frequent are known as the Casual Games.

Casual games are beyond addictions, and you can play these games as per your availability time. If you wish to know more about casual games then continue reading.

Fruit Samurai is one of the most popular casual games in which players cut fruit using a touch-screen-controlled sword. It is an easy-to-play game, and whenever fruit appears on the screen, you must swipe your finger over the screen to split the fruit. As many fruits as you slice, you earn extra points. It is a time-based game, and missing shots reduces your earned points. Whenever bombs appear on the screen make sure it’s cut otherwise you will lose the game.

The game deals with your response time as you quickly need to slice down the fruits that appear on the screen. However, each fruit fetches the same points, but you can earn more by chopping more fruits with a single swipe. The game has a timer, and you must chop off as many fruits as possible within the given time.

Angry Bird is one of the most popular casual games online and is one of the best activities for gamers to escape the mundane. You must have seen the Angry Birds movie. If so, then this game features the prime characters of the movie, and you need to hit the target by dragging your finger and forming a perfect angel before proceeding further. The game brings in the amazing use of catapults where you launch the titular flightless birds intending to knock the target off.

Check for the targets that you need to destroy with the Angry Birds by using catapults. It is easy to play this game as you just need to stretch the catapult by dragging your finger on the screen and forming an angel. Each phase has a unique challenge, but the way of playing remains unchanged.

If you are looking for the simplest indulgence where you don’t get addiction then you may consider the basketball games. It is a mind-blowing alternative for sports lovers and comes with a variety of variations. It is not a team-based game, and you can play it even alone or challenge other gamers from across the world. The game aims to make the ball cross through the basket. Kindly note that there is always an obstruction blocking your way. You need to avoid getting hit by the obstruction by planning your moves.

The screen will be having a ball, basket, and an obstruction bouncing continuously. You aim to put the ball from the basket. Drag your finger on the screen between the ball and basket to ensure a goal. Keep a check on the bouncing plank because it serves to be an obstruction and would stop you from making a goal. You need to make maximum goals within a set time.

Another interesting casual game is the carrom. You must have played the original board based carrom in your childhood. Now, you can play carrom online with an almost similar way of playing. The game involves 4 pocketed square-shaped boards with white, black, and a queen coin placed in the centre. You need to hit these coins with a striker whenever it’s your turn and earn more and more coins to win the game.

As the game commences, you will be informed of your colour coins. You aim to hit the coins and make your respective coins the pockets as early as possible. Whenever you pocket a queen, make sure that you earn a consecutive coin to retain the achievement. If you fail to do so then you will lose the queen If in case you made a foul by making the sticker pass through the pocket then you would be fined by depositing an earned coin of your colour.

Based on the ancient game of Pachisi, Ludo is also a famous casual game that you must have played with your friends or family to have an amazing time. If you have always played the game in the basic board form then you would be surprised to know that online Ludo games have unique 3D setups where you can roll a dice just by touching the screen. This multiplayer strategic game can be played with two to four players, and the game aims to make your colour token reach the respective house as early as possible.

Choose the colour of your preference, and you would be provided with four tokens of the same colour. Similarly, the challenger will also get tokens of his colour. The game aims to make all your tokens reach your respective house of the game before your opponents. Each token opens with a six on dice. While reaching the house of your colour, you also need to obstruct other players’ way and cut their tokens whenever possible. You get an additional chance for capturing others’ tokens.

Candy Crush is one of the best free casual games where you need to make the matches of three. The moves are based on swapping two adjacent candies and placing at least three matching candies together. As you place them together by swapping, the same candies get crushed and you get points. In the case of six and nine candies, the reward becomes unimaginable which can even change the entire game.

You just need to swipe candies and place the same candies together. A set is created by placing three candies together, and the bigger combination you create, the reward gets bigger. Each stage of the game has a unique setup, and the goal is to crush all the candies as early as possible.

Do you wish to have the best online gaming experiences? Download the Winzo App now and indulge in never-ending gaming encounters. The platform ensures the best gaming experiences, and you can also win real cash for all your wins.

Q) Where can I play casual games for free?

A) The Winzo App gives you a chance to play all the casual games for free, that is, you don’t need to pay anything to indulge in free boots. However, you can also win real cash for all your wins by indulging in cash-based games.

Q) Which is the best casual game?