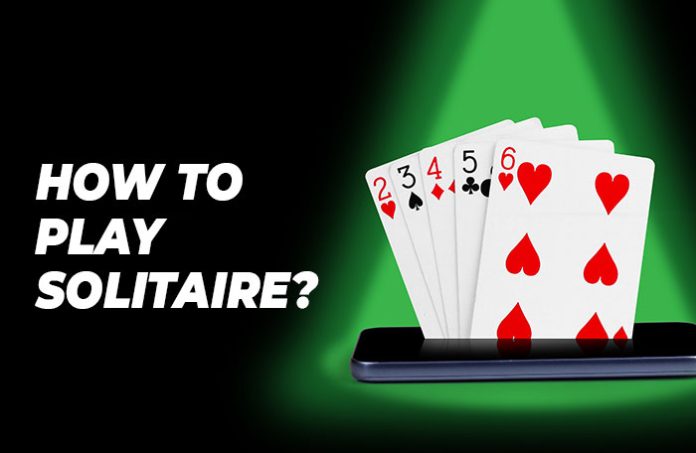 Solitaire is an interesting brain churning indulgence that teaches patience and is not only referred to as an online game but believed to be an exercise for the brain and teaches the player forbearance. The game is also known with the name of patience and card solitaire. It is a kind of card game in which the aim is to organise the cards in a systematic order. If you wish to learn how to play solitaire efficiently, prior to that you must understand the rules and other important details of the solitaire game.

There are no difficult rules to playing the solitaire game online, however, you need to understand a few rules to play the game:

How to Play Solitaire Online Step by Step

Solitaire is an easy-to-play game, however, it takes times time to master it. Continue reading to know how to play solitaire:

The aim of a solitaire game is to pile all the cards of the 4 suits in ascending order while following the category. In this game, the screen is divided into 3 sections, which are, piles displaying jumbled cards, stock from where you can drag the desired card, and foundations, where you place the cards starting from the Ace.

The cards should be moved to the four foundations in a certain order, with King on the top and Ace at the bottom. To arrange them, you can pick cards from the stockpile according to your convenience.

The piles of cards show the number on the upper card, and the remaining cards are hidden. If you have the possibility of moving the upper card then check the number and suit below it and proceed further. Kindly note that you can drag sequences within the piles and a blank pile can be filled by King cards only.

A solitaire game completes only when all four suits are arranged in ascending orders. If you are playing this game on Winzo then you get a limited time to reach the aim. You also have 1 to 3 challengers on the game table and the one who wins the game gets rewarded with the real cash.

The main objective of the solitaire is to arrange cards and shift them from the stockpile to the foundations. The cards are required to be arranged according to suit and in ascending way which starts from ace to king. It is a brain-churning game and teaches patience every time you play it.

The Winzo app is one of the leading platforms in India to play multiple online games and win real cash rewards. You can start playing online solitaire games on Winzo and get a chance to contest other players. However, this is a single-player game but this platform makes you show your manoeuvres and intelligence and beat other players. If you wish to have the best encounters in the solitaire game then download the Winzo app and indulge in a never-ending gaming experience.

Q) How can I win an online solitaire game?

A) The following are the quick tips to play solitaire online:

Q) Where can I play solitaire online?

A) Solitaire is an online game and can be played on various gaming platforms. The Winzo app is an amazing podium to indulge in online games and if you are playing solitaire here then you can also challenge others and win real cash for all your victories.

What is ‘Dream face reveal’ and why is it trending?