A Beginners Guide On How To Play Rummy – Rules, Tips & More 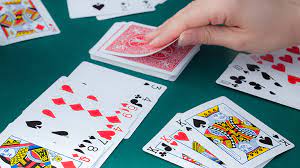 Rummy is an exciting card game that can be played between 2-6 (or more) players. The main objective of the game is to make runs or sets in order to win the game. In this, you arrange 13 cards in valid sequences and out of this, one of the two sequences should be a pure sequence.

Knowing the game rules clearly makes you win it every time you play. So, here is an ultimate guide on how to play rummy- Nail it like no one did before.

We know that rummy is one such game that churns your brain and involves tricks and detailed understanding. So whether you wish to involve in money based games, or looking to have some interesting hours with friends, here’s a detailed introduction to how to play rummy game like an expert!

Rummy is a pick and discard card game. In the beginning of the game, you have two piles (open and hidden deck) of cards from which you have to draw or discard cards. People of all ages and groups enjoy rummy as it is thrilling and a skill based game where you form a sequence or set of cards of same denominations or suits.

It is similar to the game Poker but is not exactly the same. In rummy, these cards in each suit are ranked low to high starting with an Ace, 2, 3, 4, 5, 6, 7, 8, 9, 10, Jack, Queen and King. You need to keep a track of them because it gets you points which later on makes you a winner. Jack, Queen, King and Ace usually have 10 points and the remaining cards have points according to their number or face value.

Basic Rummy Rules You Should Know

Before understanding that how to play rummy game, you must know the following rules:

Well, the main aim of the game is very simple:

PRO TIP: Sometimes, sets are also referred to as ‘books’.

Importance of Jokers in Rummy

In card hames, especially rummy, joker cards are those that can make a huge impact on the game. These indispensable cards do not possess any specific value, however, they have the potential to take your game towards vistory. A joker card in rummy is used to replace the other cards and you would find two types of jokers, that are, printed jokers and wild card jokers.

A standard deck of 52 cards comprises of 2 printed jokers and the wild joker is formed when a card is randomly picked from the closed deck in the begining of the game. If you pick the wild card joker then all the cards bearing that number, irrespective of the suit will become wild cards. For better understanding, if 8 of Diamonds is picked as the wild card joker, then the same number of Spades, Hearts, and Clubs can also be treated as wild card jokers.

Here are the examples to use jokers in rummy:

How Can You Form Sequences In Rummy?

According to rummy game rules, a sequence is a group of two or more consecutive cards of the same suit. You need to form an impure and a pure sequence in order to win the game.

It is a group of three (or more) cards of the same suit with one (or more) joker cards.

A pure sequence is a group of three or more cards of the same suit that are placed in consecutive order. Always remember, there is no wild card or a joker card in a pure sequence.

What is a Set in Rummy?

The set in rummy refers to a group of three or more cards that has the same value, but different suits. Kindly note that a valid set must not have more than one card of the same suit. You can also bring your wild card or Jokers in use to form a set. Here are the examples of a valid sets – 2♥ 2♣ 2♦ and A♦ A♣ A♠ A♥.

You must clearly know the rules to play rummy otherwise you might loose the game.

The following are the detailed information to understand how to play rummy card game:

Generally, aces are 15 points, face cards and 10s are 10 points, and other cards are scored according to their face value.

Note: if this is a tournament, the player with the highest score is eliminated and a new round for the rest of the players begins.

Tips on How to Form Sets | Rummy

When you form a group of three or more cards having the same value but are from different suits, it is called a set. A wild card or the joker card can be used to form a set. But, you can never use more than four cards to form a set.

Quick Tips on How To Win the Rummy Game

While knowing all the rummy rules is a must, quick tips on how you can win might save you from losing the game. Stay ahead with the rest of the players in the game:

FAQs about How to Win Rummy Games Online

Q) What is the best strategy to play Rummy?

A) Well, there are different strategies for different variants of Rummy. But the first and foremost is, never draw from the discard pile until the first run is completed.

Q) Is there a cheat sheet to win Rummy?

A) Yes, there are some points that you can surely utilise to win the game. The most important one is to be watchful and always make sure you have a lifeline.

A) Yes, it is a completely and 100% safe and secure platform.

Q) Where can I play rummy online?

A) There are numerous gaming app that offers rummy, however, there are quite a few platforms that ensure a fair play. Winzo Rummy is the most trusted gaming app to play rummy games online.

Q) Can I play rummy online with my friends?

A) Yes, you can play rummy games online with your friends. You just need to send the joining link and ask them to join in to play the online games with you, including rummy.

Q) Can I win real cash with online rummy?

A) Yes, you can win real cash by playing rummy online. However, make sure that you are playing on a trusted platform. Winzo Rummy is the most trusted gaming app to play rummy games online.

This was all about how to play Rummy and certain Rummy rules that you should know before playing the game.

I hope that you will find these tips and tricks really useful when you play. If you wanna have a wonderful gaming experience, play here.

Do, let us know if we missed anything on our Instagram.

Also, for your next game, All the best!