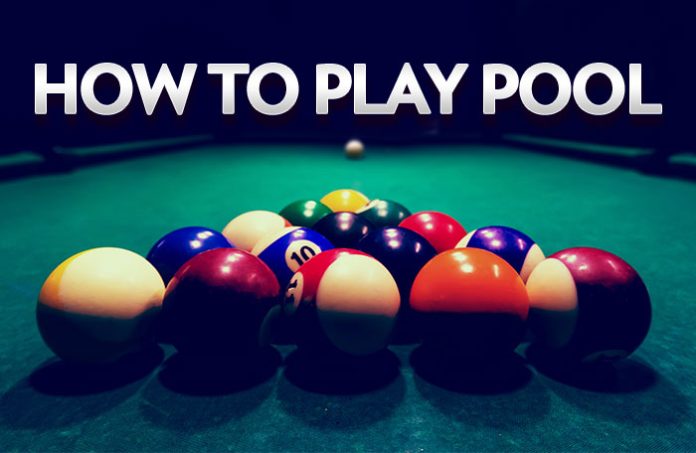 The pool is a popular game which is played on a table featuring six pockets and rails where the balls are unloaded, along with a selected number of balls and a long stick called a cue. There are a variety of pool games and all of them have a unique identity, such as 8 ball pool, blackball, 9 ball pool, 10 ball pool, 7 ball pool, straight pool, one-pocket, and bank pool. With its relation to the billiard game, the roots of the game can be traced to France, England, China, Italy, and Spain, however, the inception remains unknown, however, the earliest reference takes back to the 15th century.

If you wish to know how to play pool then continue reading to know the rules, gameplay, winning strategies, and more!

Before understanding how to play pool games, you must know the main variations, so that you remain informed about which form you are playing and what are the points to be kept in mind to avoid indulging in fouls. The following are the types of pools that are played majorly:

The 8 Ball Pool features 15 balls along with a cue ball and to win this game, one needs to pocket the 8 ball after succession to all seven, either the striped ones or solids. The placement of balls in this game includes positioning the 8 ball in the centre, one stripe ball in the back corner, followed by one solid ball in the other back corner, and the remaining can be in any order.

In the 9 Ball Pool, the first nine numbered balls and a cue ball are placed on the board. The aim is to pocket all the balls on the table, however, it is not necessary to commence with the lowest-numbered one. In this game, the balls are placed in a diamond formation with the 9-ball in the centre and the 1 ball set in front of it.

In the One Pocket game, you are required to pocket eight out of fifteen balls in a single pocket of the table. The players will announce in the beginning their preferred pocket, that is, where they will be hitting the mentioned balls. The balls that are pocketed in some other pockets are placed back on the table.

Cutthroat is another kind of challenge that features three players and each one of them attempts to succeed by pocketing other players’ balls. In the game, the total number of 15 balls is divided among the three players – one to five, six to ten, and 11 to 15, and players choose a group of balls.

The following are some of the common rules that you must know before knowing how to play pool:

The following are some of the most common fouls incurred in the game of pool:

How to Plan Moves while Playing Pool Online

1. Make sure that you aim the tip of the cue just beneath the middle of the cue ball whenever possible. Keep the shot force at a slightly downward angle to make the respective ball pass through the pocket.

2. Always keep in mind that when the shot is not a straight line to the pocket, hitting the cue ball from the left side of the intentional ball will make it move to the right and the same happens from the opposite side too.

3. In case, your cue ball is quite adjacent to the side of the table and you have to go for a standard shot, try to strive your cue bowed at the ball while remaining a few degrees off vertical. You must know that a short and strong jab down will make the targeted ball pop out in the opposite direction.

Tips to Get Better at the Pool Game

The only way to win a pool game is by pocketing all of your balls, followed by the 8-ball. There are numerous online players who don’t even miss a single chance of pocketing their ball whenever they get a chance.

Always keep the rules of the game that you are playing in your mind and play accordingly. The online pool games also give chances to win real cash, so just practice the moves and understand how to play pool in-depth to enjoy the unbeatable experience.

Now, you can play online pool games on the Winzo App. Just download the app on your smartphone, tablet, or desktop and get access to unlimited games to escape the boring hours of your day. If you are planning to play pool then do consider this detailed information on how to play pool before undertaking the games against challengers. The Winzo also give you chance to practice the game limitlessly as you can indulge in free pool games. Once, you are confident of your gameplay and wish to earn real cash then you can also opt for cash-based games and win rewards.