10+ Different Types of Card Games That You Can Play Online 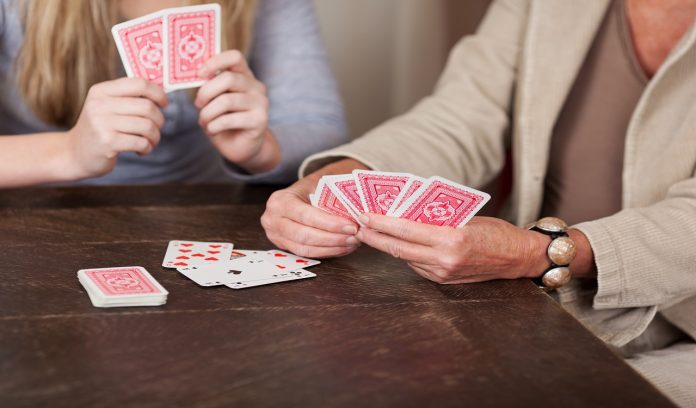 Card games can never lose their charm. Whether it is a game night with your friends or a family get together, card games serve as a super entertaining tool. So, here are different types of card games that you can play online.

It is believed that card games originated in China in the 9th century and eventually moved to the west and have become widely popular as 52 decks of cards that we know. Gradually, Indians recognized card games as a means of entertainment to spend time and bond with friends and family.

The real fun of card games comes when there are at least 4 players but today’s lifestyle leaves a small room for such opportunity. Hence, online card games have paved their way to the people who are interested in a game of cards but are unable to due to lack of players around them.

Here some of the card games that are sure to entertain you to the core:

Since the 9th century, card games have evolved and now, you can find several card games using the same deck of 52 cards but have their different method to play.

As online gaming grew, card games have made their transition to be the most popular games online. You can now challenge pro gamers from vast distances and can have a fun time playing with your friends too (without being physically present at the same places or time).

Double Solitaire is a variation of the classical solitaire which is more exciting and a little simpler for the beginners. In the game, you put down all your cards after rearranging the whole deck. Now, you make suits and rank the cards by taking turns to play. The exciting twist is that one of the players decreases his pile of cards while making the opponent’s pile grow bigger.

Double Solitaire is a fun game played between 2 players only where both players take turns to move their cards. You are allowed to move your card in a series and your turn ends when you can’t make any further move.

Sixty six is a tricky game with a tad bit of strategy to be used while playing the game. The name of the game says that a player needs to score 66 to win the game. In a sixty-six card game, you need 24 cards in a deck where the lowest card is numbered 9.

At the beginning of the game, a player gets six cards and the rest of the cards are kept face down on the table. On each turn, a hand is picked from the face down pile of cards. You score upon making a pair or a trump suit. Once you reach the score 66, you win the game.

Rummy originated in the United States and is one of the most popular card games played online. Unlike other card games, Rummy is the only one that uses Joker as one of the main cards.

It is a pick and discard card game where you need to make runs or sets in order to win the game. Each player is given 13 cards to deal with and there are two piles of cards from which you discard and pick cards to form your runs or sets.

Teen Patti is an Indian card game and is inspired by a British game, called ‘3-card brag’. Betting and dealing cards being the main feature of the game, a player has to make a trio of cards of the highest number to win the game. A standard deck of 52 cards is used to play the game between 3 to 6 players.

When the game begins, you need to put the stakes at the centre of the table, this stake is for the winner. The game continues by usual betting and dealing the cards. All the players try to make the trio of the highest number before anyone else does. The first one to do so wins the game.

Poker has become one of the most popular games in India. A lot of buzz around the game is created due to Hollywood movies and the thrill Poker has to offer us. If you wish to win the game, you should have a better understanding of the cards, the hands and how they are dealt in the game.

If you bet, you have to make a call (if you are confident that you have the best hand) or you can fold (where you drop out of the game). You need to create the best possible hand of 5 cards. The game is played between 2-10 players and each player gets 2 cards to deal with (placed face down) and 5 cards (placed face upwards). With these 5 cards you need to make a poker hand to win the game.

Satte pe Satta is yet another entertaining game mostly played in India. The game revolves around 7 decks of cards which are going to make you win or lose the game.

The game is played between 3-8 players with the standard deck of 52 cards. Each player has to arrange their cards in the order of the suits: Hearts, Clubs, Spades, and Diamond. The game begins when a player lays down a 7th card of hearts. Now the other players have to complete the sequence till the ace of hearts.

The game continues in a clockwise direction and if the player doesn’t have the sequence, the turn is passed to the next player. Satte pe Satta continues till all the cards in hand are used up.

Three-Two-Five is a trick taking card game played by children oftenly. It is a comparatively easier game and is played with 30 decks of cards.

The cards are dealt in counterclockwise direction and 3 players can play the game simultaneously. From a standard deck of 52 cards, the cards from 2 to 6 and two 7s are removed to make it a 30-deck card. In the game, each player has to win a certain number of tricks and the dealer has to win at least 2 tricks.

The game doesn’t end and you can continue the game for as long as you want. Just keep a track of score in case you need to end the game. The player who has the highest score wins the game.

Bridge is a popular game and is played globally. With the right strategies and tricks, this game can easily be won by anyone. The main objective of the game is to bid high and then try to beat your opponents.

Usually the game is played between two teams, each team has 2 players. All the cards are dealt face down and the player has to pick up the card while making their calls. .Each player has given 13 cards and the player who has the highest trump card wins the call.

Blackjack is a famous casino game in which players bet at the beginning of the game. The game can be played between 2-7 players.

The main objective of the game is to beat the dealer by getting a count close to 21 and you can’t get a count over 21. When you’ve bet, the dealer deals with 2 cards (face-up) and gives each player at the table. Revealing only one card to the players, the game continues until a player gets a count close to 21 (but not above 21).

Mendikot is another trick-taking game and the aim of the game is to collect the highest number of 10s. There are two teams and each contains two players and the dealer deals with 13 cards. Each player gets 5 cards and the rest of the cards are dealt later.

The player who is sitting next to the dealer wherein he throws in some random card to lead the first trick. The rest of the players follow suit. If any player is unable to do so, they can play any other card. The player who makes the highest trump is the winner of the game. The winner gathers all the cards after each round from the other player and leads the next trick.

As the name suggests, the game is about bluffing your opponent. Just a bit of luck and the right strategy can make you win the game. Keeping a watchful eye on the opponent’s every move is what the game is all about.

Bluff can be played between 3-10 players with a standard deck of cards. The cards are shuffled and dealt to each player at the table. The dealer chooses which rank has to be played and the players need to play that rank only.

All the cards are placed face down, hence, each player can bluff and get rid of all their cards. And, the player who gets rid of their card first is the winner of the game.

Donkey is primarily a children’s card game in which a player has to collect 4 cards of the same rank and touch his nose after making a quartet. Children of 3-13 can play this game where they would learn about different parts of their face and also arrange the cards according to their ranks.

Q) Which card game is the most popular game?

A) Poker and Rummy are the most popular card games that you can play online to earn real money.

Q) What is the most fun card game played online?

A) The most fun card game is satte pe satta and three-two-five that can be played online.

Q) What is the easiest card game to play to learn?

A) Teen Patti is the easiest card game to learn online. With easy rules and tricks, you can learn the game within no time.

We know that if you are least bit interested in card games that is because you’ve played the game in your childhood with your friends or family.

Fun game nights and family get-togethers hold the most precious memories and if you’ve nailed every game back then, now is the time to earn real money while playing card games.

Download WinZO and get started! Do let us know if you’ve any more card games that we’ve missed out on!